In September, the fishermen network reported a stranded green turtle in Batoke (South-west of Cameroon). The necropsy showed that the ingestion of plastics was the main cause of death.

In order to monitor the conservation status of marine megafauna species and their habitat, AMMCO has developed various approaches, including citizen science, by setting up a network of local fishermen. They are responsible for reporting the opportunistic observation of dead or living animals. The network was  expanded all along the coast of Cameroon with the support of the National Geographic Society. It is in this context of citizen science program that the fisherman Mensa of Batoke-Limbe contacted the AMMCO field assistant in charge of the northern coast of Cameroon, to report the stranding of a sea turtle. AMMCO immediately set up a team and sent it to the scene to attend to the situation and carry out some assessments. The unfortunate reptile was identified as a green turtle, Chelonia mydas, ranked as an "Endangered" species on the IUCN red list. 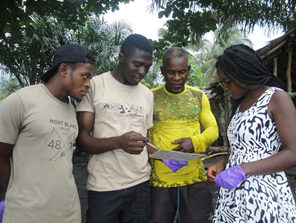 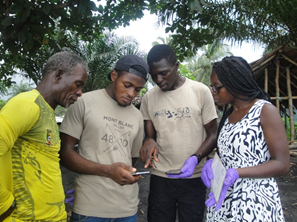 Identification of the stranded turtle and training

We first recorded a general description of the animal as well as the shape, size and other external features using a measuring tape and a scale. We noted that the animal was an adult female of 30 kg with a total length of 88 cm, head length of 25cm, shell length of 63cm and a width of 57cm. 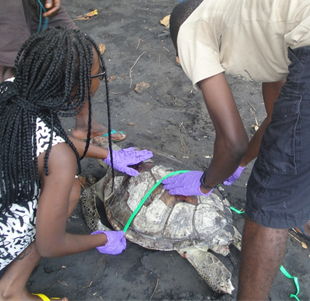 We then proceeded with the necropsy to collect samples of flesh and intestine for genetic analysis. In a 20-cm section of the intestine, there were plastic waste that had blocked the intestine, tore the digestive tract and thus caused the death of this sea turtle. 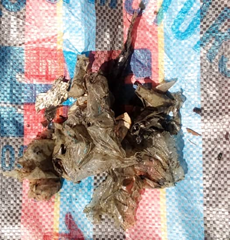 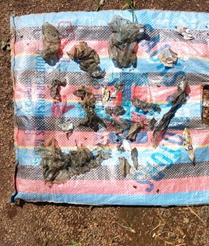 If actions are not taken now, these wonderful sea turtles could disappear from our planet very soon and our descendants may not be lucky enough to see them. It is therefore imperative to act now at each level.

How to protect sea turtles?

- Avoid as much as possible the use of plastic packaging in favor of biodegradable packaging.

- Do not trash plastic waste on the ground, in rivers or on the beach;

- Organize or participate in beach clean up campaigns;

- Create awareness about harmful consequences of plastic waste to the environment;